Praise God for His faithfulness and answers to your prayers!

The news is all good from Little Rock. Peggy and I met with Dr. Barlogie yesterday and he said everything looks really good.

No protiens can be detected, they did not find any new active disease or lesions, and my bones are repairing themselves.

He presecribed 6 more cycles of chemo for preventative maintenance and I go back in 3 months for another review.

Peggy and I are so thankful for all the prayers and help during these times. Without your support, making these journies would be so difficult.

Things went well today. Frank had to be at radiology by 10. We've been thinking all this time they were going into the shoulder lesion they found when he relapsed in 2005. But, they didn't.

They said that all the other lesions he has have shown some changes. These are changes that show where his body is trying to repair itself. This takes years depending on how big the lesion is but it's still a good sign to see.

But the lesion they went into today was the largest one he's had from the beginning. It's in his right hip. They said it hasn't changed over the 4+ years. So, that's where they went in today.

We did feel good about it because he said it is not a "hot spot". So, although that makes us feel really confident.... why are they doing this? We don't know.

Frank said the experience was a new one for him and strange at best. He was on his back. The went in from the front so he got to watch the whole thing..... he'd tell it better than me so I'll skip all that.....

After we left there, we drove to Hot Springs for him do some work. While he was in his meeting, I got to browse the quaint little shops there. I had a neat experience while I was alone there.
There was a veteran on an old bike decorated with more flags than he had room for. He got off his bike to go into the coffee shop that I was sitting in front of. I struck up a conversation with him but, of course, quickly noticed that he didn't talk. He had one of those black boxes that you use to make your vocal cords vibrate so he can talk. To be honest.... this one of those guys that most people ~yes, I have been guilty of this ~ would avoid eye contact with. But he had smiled so genuinely at me, and we DID catch eyes. That made me really want to talk to him. We had a nice conversation about the obvious... places he's lived, how he got his bike (not a motorcycle, a 10 speed), and why I was in AR. He had cancer of the throat in 1995 and has been using the box since then. He said everyday that he wakes up and gets out of the bed is a great day. And we talked about the blessing of healing! Then he rode off on his only mode of transportion.

But he told me I made his day and thanked me for talking to him... which, in turn, made my day.
We are in the hotel room for the night. I plan to watch Idol and vote from here. Frank has been in and out of naps... 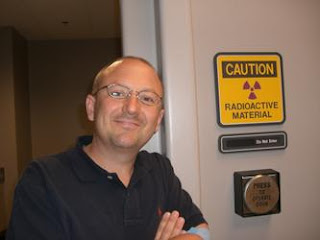 Well, things have gone well this morning.
The biopsy is over. Frank said the rest of the day has to go better now that it's over.
We had an MD watching the tech to learn. She's going to work in LA and the MD's there do their own bone marrow pulls. She watches 10, then does 10.
Good medical training! We were #6 to be watched. Frank and I giggled on the way out that we were going to count to people in the waiting room and then start warning people! "sir, I'd reschedule if I were you!" But we didn't.
He's in the PET scan waiting room. He's radioactive now, so I can't be with him. He'll be about 2 hours, so I came to the library to check email and talk to you guys... MRI tonight at 7 pm. Then we'll be ready for bed!
Psalm 62: 5 Find rest, O my soul, in God alone; my hope comes from him. 8 Trust in him at all times, O people; pour out your hearts to him, for God is our refuge.
Thank you for praying for us. We feel it!!
Posted by Peggy at 10:37 AM No comments:

Well, Happy Mother's Day to all the momma's out there. I know it's great to get the homemade cards, extra hugs and kisses and special treats! For me... I had all that.... I just wish I was little enough to fit in my mom's lap without hurting her! I have tried several times these past years. She never complains about my weighing more than her and even though her legs are probably numb... she makes it work. Cause she's my mom!!

We are in Little Rock. We dropped the kids off at youth group and left from church. I think we got here in one hour!! He won't tell me how fast he was going. We were singing to the ipod and I was doing a puzzle. Next thing I know we were here. In record time. Anyway... he's asleep with the remote control in his hand.

The past month has been such a roller coaster for me. I was starting to feel anxious and nervous about coming back. I didn't really share it with Frank, but I did with some of my girlfriends. But as I prayed through it, I felt very strengthened by the Lord. I just felt like the message from God was that He was getting me ready for something and reminding me that He would be there. Just trust in Him and stay close! Well, I assumed that related to Frank's checkup and I started to worry again.... which made me pray even more.

God is so sweet to just meet us where we are. And prayer is so powerful. I know we all know that.... why it surprises us is a mystery. Different things have come up in the past few weeks. Normal life stuff... but all things that sent to my knees...you know... just throw you back for a bit... and now I feel such a peace about all that and the check up too. I know He is right here.
We had the sweetest day at church. We worked all week making food for the Mother's Day picnic lunches we sell for the youth. It is such a tiring week, but the timing was perfect. I was busy all week with little time to think about anything else. It is fun.... we sold the food this weekend.

The bone marrow biopsy is first thing tomorrow. He'll have ... um... pain meds for breakfast. They should kick in fast because he can't eat until after the PET scan.
Frank told people today he was planning on getting more "wholy" while he was here. Another bone marrow biopsy... and one from the shoulder this time too. He makes me laugh.

I'll be updating every day while we're here. Thank you for your prayers. We know they work!!
Love to all...... Peg
Posted by Peggy at 10:34 AM No comments: